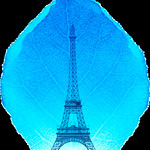 On Sunday, Indigenous leaders, activists, and their allies gathered along the banks of Bassin de la Villette, Paris’s largest man-made lake, as 25 Indigenous activists from North and South America formed a canoe flotilla on the lake. Renowned Indigenous North American climate activists from the Ponca Nation in Oklahoma to the Tla’Amin First Nation from British Columbia to Lummi Nation youth from Washington State, among others, participated in the event.

The purpose of the flotilla was to call upon the world’s governments to include the rights of Indigenous people in the text of the UN climate summit’s international deal, which is expected to be finalized in the coming days, and to highlight the relationship between people and water. The inclusion of the rights of Indigenous peoples in the legally binding portion of the agreement is a contentious issue at the climate talks. Several countries — including the United States, Norway, and Australia — have worked to eliminate Indigenous rights from the binding parts of the agreement, and include them only in the “aspirational” preamble. So far, they have succeeded — the latest version of the agreement, released on December 9, references Indigenous rights only in the non-binding introduction. 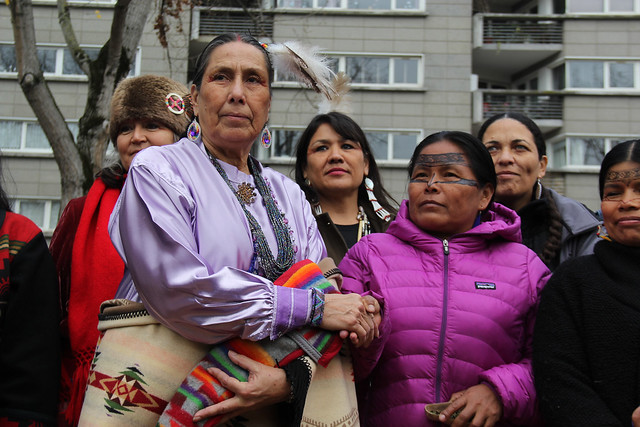 Photo by Desiree Kane Indigenous activists gathered along the banks of the Bassin de la Villette to call for inclusion of Indigenous rights in the binding portion of the Paris climate agreement.

“It’s key that we are here as Indigenous peoples because we are the frontline communities,” said Dallas Goldtooth of Indigenous Rising, which works to defend Indigenous rights. “Our communities are the first ones to feel the affects of climate change.”

Speaking at the event, he continued, “Our communities are impacted and our traditional ways of life are at risk of being destroyed and even up until yesterday, governments of the world refused to let the rights of Indigenous peoples to be put into the Paris agreement. That is not acceptable, the rights of Indigenous peoples must be respected and acknowledged in a legally binding text of the Paris agreement. That is non-negotiable.”

The activists presented three documents to reinforce and articulate their demands, including the Indigenous Women of the America — Defenders of Mother Earth Treaty, which elaborates the stresses being placed on Mother Earth, calls for support for the rights of Indigenous peoples, and demands protection of nature. The treaty was signed and ratified by Indigenous women leaders from North and South America in a sacred ceremony along the same banks of the Bassin de la Villette.

Ena Santi from the Kichwa community of Sarayaku in Ecuador, Sarayaku council member in charge of women’s issues, addressed attendees at the event, saying, “This morning together with other Indigenous women we signed a treaty. My village has been fighting very hard for a very long time. We want to live a healthy life in the rainforest and our struggle is a hard struggle. The Earth is getting warmer and we can’t go on like this. We have to fight this together as women — the whole world, we have to fight this together. This is why we have signed the treaty.”

She continued, “We want our children to have a good life. Not just Indigenous children, all children. We have the strength of mountains and we are the descendants of the jaguar. We will fight this until the end for our children.”

A Declaration to Keep Fossil Fuels in the Ground was also presented at the event, calling on world leaders to stop extraction of coal, oil, and gas. In an effort led by Indigenous peoples, the document has been signed by over 150 organizations, including 350.org and Amazon Watch.

Faith Gemmill of the Gwich’in & Pit River/Wintu Nations in Alaska, executive director of the nonprofit Resisting Environmental Destruction on Indigenous Land, emphasized the impact of drilling activities on her home: “Alaska is ground zero of climate change. [It] directly affects and undermines our livelihood. The ground we walk on is literally melting beneath us. Whole communities are under threat of being climate refugees as they are being forced to relocate. The fossil fuel companies see climate change as an opportunity. As the ice melts into the ocean, they salivate to drill offshore.” She added that, following a successful campaign to stop Shell from drilling in the Arctic, Alaskan politicians had called for additional drilling in the Arctic National Wildlife Refuge, “the sacred place where life begins.”

A third document was also presented at the demonstration: The Kawsak Sacha or the “Living Forest” proposal on how we can live together with the natural world, created by the Kichwa Indigenous people of Sarayaku, Ecuador. The proposal, which is based on the traditional knowledge of Indigenous peoples in the Amazon rainforest, aims to create a new legal category of protected areas for Kawsak Sacha, which would be “free of oil, mineral, and lumber extraction” and would preserve the territory of Indigenous peoples.

The presentation of these three documents emphasized the need to embrace and implement the collective knowledge of Indigenous peoples as perhaps the only way to stop catastrophic climate change.

“Indigenous peoples live with this wisdom, live in harmony with living beings. We are here to protect the lagoons, the water, the trees and the mountains. We are the balance. We live the balance. Only if our proposal is heeded will be able to ensure the future,” said Felix Santi, president of the Kichwa community of Sarayaku in the Ecuadorian Amazon.

“We declare that Indigenous people’s territories are a vital and crucial place for the future of the planet and our territories are our sacred heritage,” he added. “There should be no more oil and gas, no more mining, no more logging in our lands and territories.”

Gemmell, echoed this sentiment, and believes that the destruction of humanity will begin if fossil fuel companies continue to get access to sacred places. “We are calling for a full phase out of fossil fuels. No more business as usual, we don’t have the luxury of time.”

This story has been updated to reflect that the preferred spelling is Lummi Nation, not Lumee Nation.

Research shows exposure is worse for poor and Black children due to historic discriminatory zoning policies.

Is Evolution the Solution to Pollution?

Don’t count on it, unless you're a small killifish with a large family of genetic cousins and a superstar ability to rapidly evolve.

From the beautiful to the bizarre, this photographic showcase of life on Earth shines a light on some of our planet's most amazing species and places.

Will the Dragon’s Blood Tree Soon Become the Stuff of Legends?

The iconic tree endemic to Yemen’s Socotra archipelago is increasingly threatened by development, climate change, and a protracted civil war.

Prisons and jails across the country are failing to adequately protect prisoners and staff from the pandemic.