The Roving Dolphins of the Potomac River

In the early 1600s, English explorer John Smith described the Potomac River as an Edenic waterway teeming with wildlife. Early colonists also reported gargantuan sturgeon and massive schools of fish – and at his waterside estate, Mount Vernon, George Washington himself had three commercial fisheries on the Potomac River.

Originating in the Allegheny Highlands of West Virginia, the Potomac River’s watershed encompasses 15,000 square miles, spreading over the District of Columbia, and four different states – Maryland, Pennsylvania, Virginia, and West Virginia. The 380 mile waterway is the second largest tributary feeding the Chesapeake Bay, the biggest estuary in America, and one of most productive bodies of water on earth, home to 3,600 species of plants and animals. But, in the centuries following the colonial period, untreated sewage, agricultural runoff, and industrial discharge took a toll on the river – and wildlife suffered.

These days, though, the Potomac River is recovering. The Clean Water Act in 1972, followed by the creation of the Environmental Protection Agency’s Chesapeake Bay Program in 1983, catalyzed more than five decades of restoration effort and policy change, including stricter mandates on nutrient input and improvements in urban waste management, leading to a decline in the river’s primary pollutants – nitrogen, phosphorus, and sediment. Once-imperiled species, including bald eagles, osprey, and American shad have returned to the waterway. And now, researchers are also documenting significant numbers of common bottlenose dolphins in the lower portion of the Potomac River.

Found in tropical and temperate waters worldwide, bottlenose dolphins are among the most common cetaceans on the planet. The marine mammals are encountered in both offshore and coastal waters, including bays, gulfs, and estuaries. While they are not an endangered species, bottlenose dolphins are vulnerable to human disturbance, and are threatened by habitat alteration, diseases, pollution, and the accumulation of biotoxins. According to the Marine Mammal Protection Act, five different bottlenose dolphin populations encountered along the Atlantic Coast are considered depleted.

“There are a lot of dolphins here,” says Ann-Marie Jacoby, associate director of the Potomac-Chesapeake Dolphin Project. “Since 2015, we have identified over 1,000 animals, and about 30 percent of those we see year after year. So, it suggests that they’re coming back to this area, they’re using it.”

The Potomac-Chesapeake Dolphin Project is a research initiative directed by Dr. Janet Mann, a professor of biology and psychology at Georgetown University. It has been cataloging the region’s roving bottlenose dolphins for the last five summers. From May through October every year, the project surveys a 14-square mile swath of the Potomac River near Chesapeake Bay, from a research station located on Virginia’s Northern Neck peninsula. A team of graduate students collects data on the dolphins frequenting the area – which includes photographing the dorsal fins of individual dolphins. Images of the animals observed in the Potomac River are added to the Mid-Atlantic Bottlenose Dolphin Catalog curated by researchers at Duke University. The massive catalog identifies individual bottlenose dolphins and is shared by cetacean researchers along the entire East Coast. So far, the Potomoc dolphins have also been spotted in waters off the coast of Beaufort, North Carolina, Virginia Beach, and Cape May, New Jersey.

“Knowing where else they have been sighted and when they’ve been in these other locations gives us more information about which populations they belong to. So far, we’re finding out that there are, it seems, multiple populations using this area – some that are considered estuarine and some that are coastal animals,” says Jacoby.

“It’s a very important thing to know, because under the Marine Mammal Protection Act these dolphins are being managed by the National Oceanic and Atmospheric Administration (NOAA), and so they are managed in these stocks, or management units, and if you look at those, you’ll see the Chesapeake Bay is pretty much void of data points,” says Jacoby. “And we’re finding that there are a lot of dolphins here.”

The frequency of sightings documented by the Potomac-Chesapeake Dolphin Project also suggests the Potomac River and the Chesapeake Bay support an exceptionally high density of bottlenose dolphins. At the outset of the project in 2015, after 73 hours of observation spread over a 14 day period, the Potomac-Chesapeake Dolphin Project’s researchers were able to identify 193 individual bottlenose dolphins. By comparison, in Western Australia’s Shark Bay, a UNESCO World Heritage Site believed to sustain one of the highest densities of bottlenose dolphins on the planet, researchers would expect to document less than half as many dolphins over the same time period.

Researchers are also trying to determine how far up the 405-mile Potomac River the animals are traveling. In July of 1844, a pod of bottlenose dolphins was spotted cruising the river not far from the capital — and others have been sighted as far upstream as Alexandria, Virginia, more than 90 miles from the mouth of the Potomac. A survey conducted in the mid-1990s also recorded bottlenose dolphins in other regional waterways, including the Elizabeth and Rappahannock rivers. More recently, the Potomac-Chesapeake Dolphin Project has documented dolphins as far upriver as Dahlgren, Virginia, about 60 miles from Washington, DC.

However, much about the dolphins frequenting the Potomac River and Chesapeake Bay remains a mystery. Researchers are still trying to fully understand why the animals are coming, and how long they have been using the waterways.

“Given that we do have this recovering Bay and there have been a lot restoration efforts for over 30 years now, we are seeing a healthier Chesapeake Bay, and specifically, a healthier Potomac River,” says Jacoby. “I wouldn’t be surprised if there is an increase in the number of animals coming, but I can’t say definitively that is the case.”

“We do see quite a few females and calves, and not just older calves, but also newborns,’ says Jacoby. “We also see a lot of mating and socializing behavior, so it suggests the area is important for both breeding and birthing.”

On August 17, 2019, while following a group of approximately 50 dolphins downriver toward the Chesapeake Bay, in waters near Lewisetta, Virginia, Jacoby even witnessed evidence of a wild dolphin birth — something rarely seen by researchers. Although bottlenose dolphins are among the most studied marine mammals on earth, the only other wild birth documented by scientists was in 2013, off the coast of Georgia.

The scientists are also recording social behavior in an effort to better understand how diseases are transmitted and contracted by bottlenose dolphins. In 2015, the Potomac-Chesapeake Dolphin Project began as a pilot study following an unusual mortality event caused by a type of morbillivirus. From 2013 to 2015, more than 1,600 bottlenose dolphins stranded along the East Coast between Florida and New York. During the mortality event, the largest increase in annual strandings occurred in the Chesapeake Bay region, with Virginia documenting more stranded bottlenose dolphins than any other state — a total of 538 animals.

“We are particularly interested in assessing the consequences of this disease outbreak and possible future outbreaks so that we can make sure populations are healthy,” says Jacoby.

Another concern for the researchers at the Potomac-Chesapeake Dolphin Project is climate change, which is already impacting the Chesapeake and the Potomac River. Due to land subsidence, sea level is rising at a rate twice the global average in the Chesapeake region, and atolls like Holland’s Island and Sharp’s Island have already been swallowed by water.

Climate models for the capital area also project wetter weather in the future — and already, 2018 was the region’s rainiest year to date. Extreme rainfall in the Washington, DC area has serious implications for the Potomac River and the Chesapeake Bay, as regional flooding causes sediment along with runoff imbued with fertilizer, oil, and other debris to stream into local waterways.

The Potomac-Chesapeake Dolphin Project’s researchers still don’t know exactly how the rising and warming Chesapeake Bay, along the increased precipitation projected for the region, will combine to impact bottlenose dolphins and other wildlife. But any increased runoff spurred by higher-than-average rainfall will exacerbate pollution in regional waterways, counteracting decades of restoration and recovery efforts undertaken by federal, state, and local governments, along with non-profit organizations like the Potomac Conservancy. In Western Australia’s Shark Bay, a marine heat wave in 2011 which caused water temperatures to rise more than four degrees above average had long-term impacts on the survival and birth rates of bottlenose dolphins. Following the heat wave, data indicated the survival rate of bottlenose dolphins dropped by 12 percent there.

But for now, bottlenose dolphins are still showing up in the Chesapeake Bay and the Potomac River. Many of the regulars have even been nicknamed by the Potomac-Chesapeake Dolphin Project’s researchers. There’s Alexander Hamilton, Jimmy Carter, and Ladybird Johnson, among others. The dolphin born in the Potomac River in mid-August has already been assigned a moniker too — the baby has been dubbed Gwendolyn Mink, and its mother named for Patsy Mink, the first woman of color elected to the United States Congress.

Malee is a freelance writer currently based in northern Virginia, just outside Washington, DC. She regularly writes about the capital area’s natural assets. More of her work can be found at www.maleebakeroot.com.

How Much Longer Will Wild Coho Hang on in the Golden State?

As wild salmon teeter closer to extirpation in central California, conservationists work to rewild the floodplain and reshape our relationship with it. 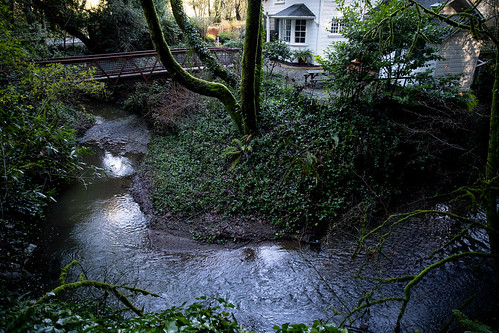 Revelations have major implications for animal rights as well as public and environmental health.

In Review: Chasing the ThunderDirected by Mark Benjamin and Marc Levin

Standing in Solidarity With the Wet’suwet’en

The Coastal GasLink pipeline is a full-front assault on First Nations' sovereignty.