They might be energy-efficient, but white LED lights are far worse for insects than the traditional sodium bulbs they are replacing, says new study.
Maureen Nandini Mitra

There is some quibbling about the numbers but, in general, biologists agree that insect populations across the world are declining at an alarming rate. Most estimates peg the decline at about 75 percent or more in the past 50 years due to multiple stressors, including habitat destruction, pesticide use, industrial pollution, climate change and more. Ecologists have described these stressors as a “death by a thousand cuts.” Now, another group of researchers say they have found the strongest empirical evidence of yet another, often overlooked, cut — streetlights. And apparently, energy-efficient, white, LED streetlights are far worse for insects than the traditional sodium bulbs they are replacing.

New research provides the strongest evidence yet that light pollution, especially from LED streetlights, can have detrimental impacts on local insect populations and the ecosystems they support. Photo by Kurayba / Flickr.

Field research by the UK Centre for Ecology & Hydrology, Newcastle University, and Butterfly Conservation found the abundance of moth caterpillars in hedgerows under light-emitting diode or LED street lamps in various locations in southern England was a whopping 52 percent lower than in nearby unlit areas. In hedgerows lit by sodium lighting the drop in abundance was 41 percent.

The researchers, whose findings were published last week in Science Advances, also found that in grass margins along roads, moth caterpillar numbers near LED streetlights were a third lower than in unlit areas, whereas sodium lights had little effect on their numbers.

“The rapidly increasing prevalence of LED lights, which are often much brighter as they are so energy-efficient and cheap to run, is likely to increase the negative impacts of light pollution on insects,” Douglas Boyes of the UK Centre for Ecology and Hydrology, who led the new research, said in a statement. “This is expected to have knock-on effects on other species, including predatory insects, hedgehogs, and songbirds, which need to find hundreds of caterpillars a day to feed themselves and their young.”

That artificial lighting at night, or ALAN, as researchers like to call it, disrupts a range of insect (and other wildlife) behaviors has been well established. Exposure to blue-rich light from LED lights especially has been shown to disrupt natural sleeping and eating patterns in wildlife. (Most insects can see the color blue.)

For example, fireflies, who depend on their bioluminescence to attract and find mates, find it difficult to do so in the presence of artificial light. Mayflies, who typically mate and lay eggs in lakes and streams that they use visual cues to identify, often get confused by the light reflected off asphalt roads and lay their eggs on roads instead. And, of course, we have all at some point seen how moths and other little bugs swarm around outdoor lights, which leaves them vulnerable to predators.

But so far, it hasn’t been clear whether nightlights were primarily impacting the behavior of individual insects or were impacting insect populations more broadly. To fill this research gap, Boyes and colleagues compared moth caterpillar communities at 26 pairs of sites, with each pair consisting of either a hedgerow or grass margin lit by streetlights and an otherwise identical but unlit section of habitat. 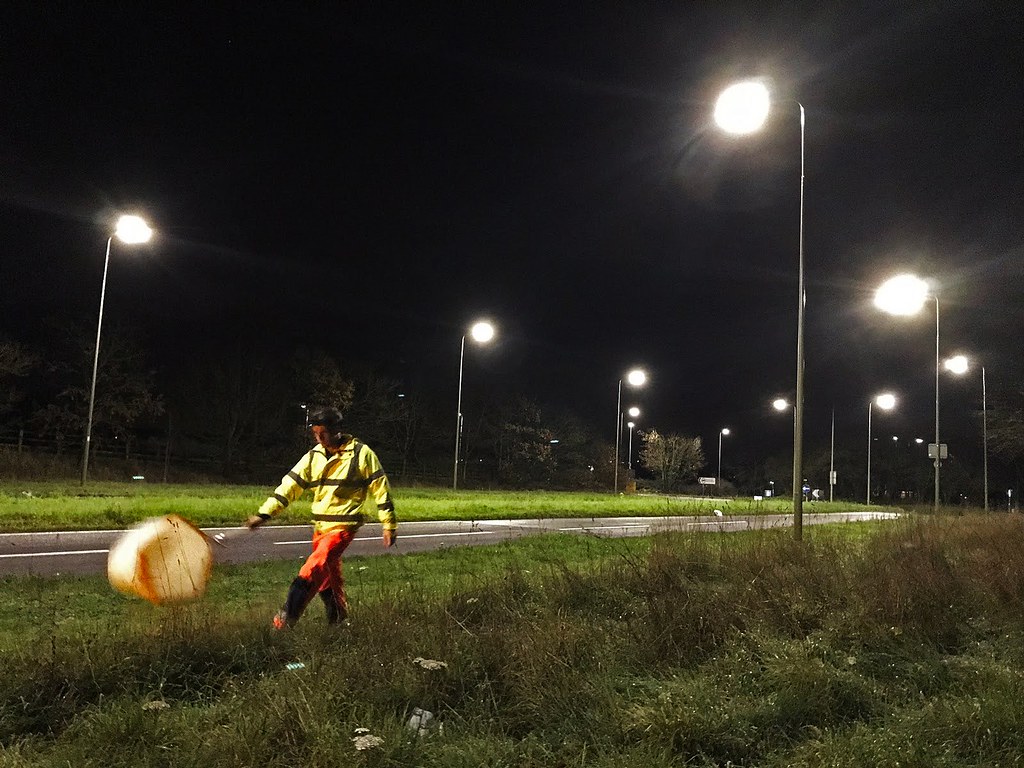 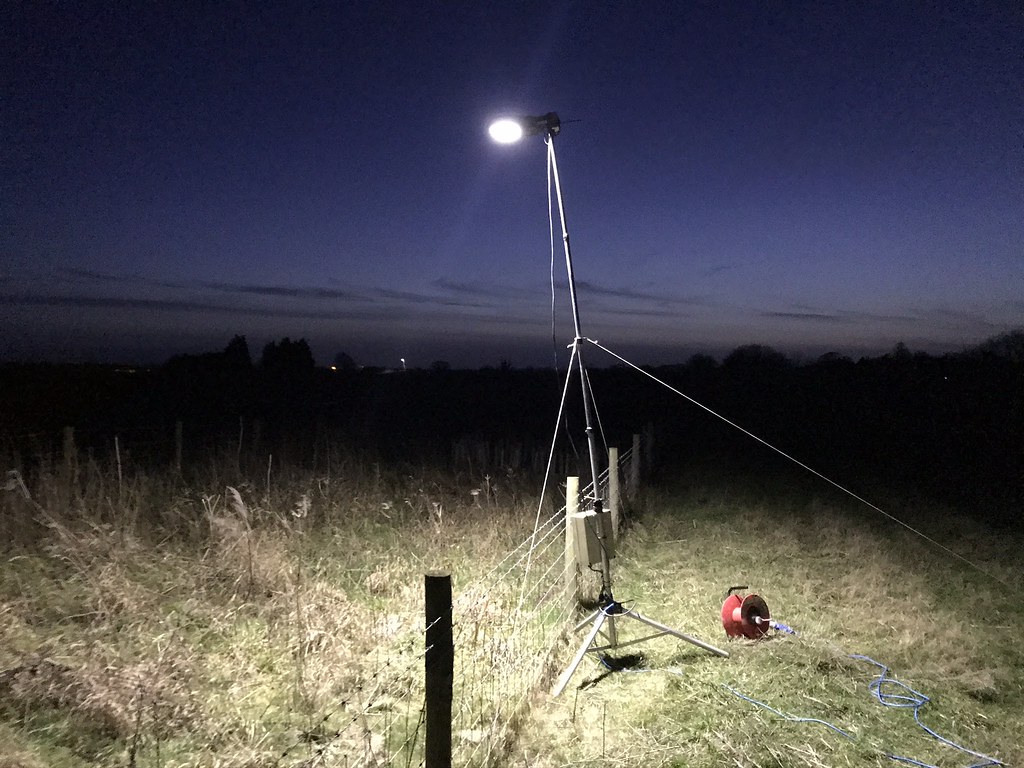 Experimental lighting rigs (white LED, in this case) were used to see whether light affects the behavior of nocturnal caterpillars in grass margins with no history of lighting. Photo by Douglas Boyes. 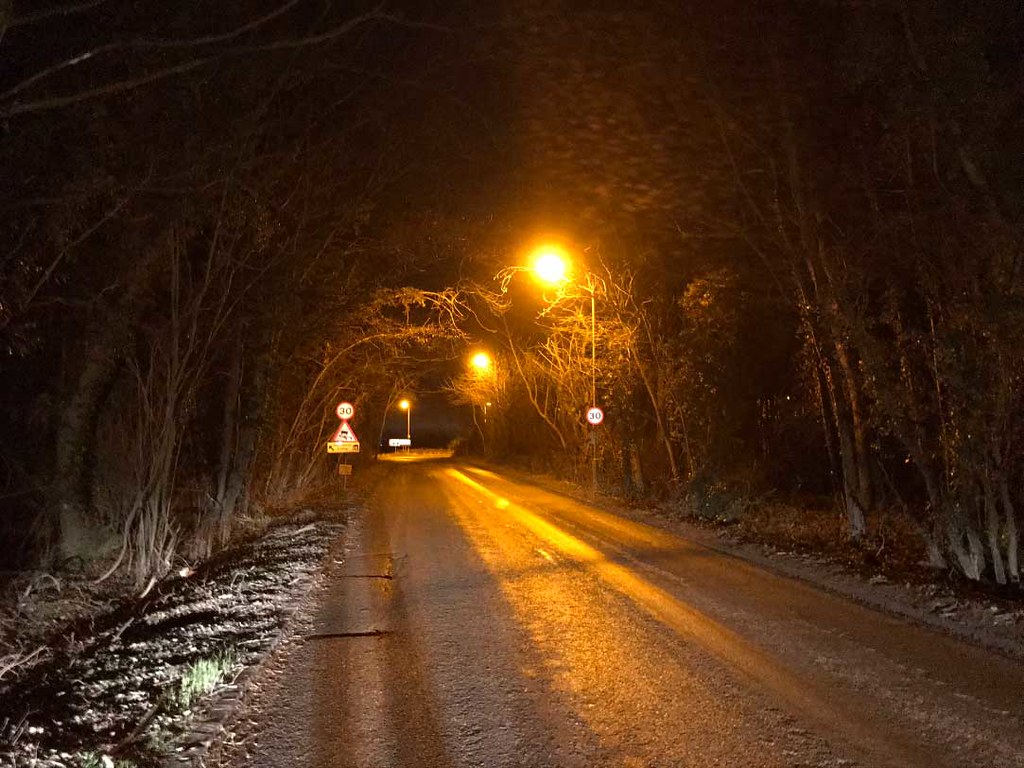 Sodium streetlights, with their characteristic orange hue, are less harmful to insects. Photo by Douglas Boyes.

Almost all previous research on light pollution has focused on adult insects, but studying caterpillars, which are a lot less mobile, enabled them to get more precise estimates of the impacts of street lighting on local populations, the researchers say.

The lit sites included 14 illuminated by high-pressure sodium (HPS) lamps, 11 with LED lamps, and two with older low-pressure sodium (LPS) lamps. Apart from the drastic drop in numbers at the lit sites, the researchers also found that the caterpillars at these sites were typically heavier, perhaps because the nighttime lighting sped up their development.

They also installed experimental LED and HPS lighting rigs in field margins with no history of lighting and sampled caterpillars at each site 1 and 2 hours after dusk. They found that LEDs, but not HPS lamps, significantly reduced caterpillar abundance, suggesting LEDs alter feeding behavior.

The authors say the large diversity of moths means they are broadly representative of nocturnal insects, with any negative impacts from a threat likely to also be experienced by other species. Their findings, they say, provide the strongest evidence yet that light pollution can have detrimental impacts on local insect populations and the ecosystems they support.

Given artificial light is increasing by around 2 per cent per year globally, and more and more cities and towns are opting for LED lights — which are cheaper, save energy, and are considered better for public safety because of their brightness — this is a matter of serious concern for the half of the millions of known insect species on Earth that are nocturnal.

For that matter, no living species benefits from prolonged 24x7 exposure to lighting in the long run. Exposure to blue-rich LED lights isn’t so great for humans either, since it impedes secretion of the hormone melatonin, which regulates the body’s circadian rhythm and helps balance the reproductive, thyroid, and adrenal hormones.

On the positive side, this is one kind of pollution that is relatively easy to tackle. “LEDs can be modified far more easily than sodium lamps, for example, by reducing their intensity through dimming, and using filters to block the blue wavelengths of light that are most harmful to insects,” Boyes says.

“Ultimately, we need a balance between protecting both public safety and wildlife, by ensuring that lighting is well-designed, away from important habitats, and switched on for limited times,” adds study co-author Professor Darren Evans of Newcastle University.

We are standing at a pivotal moment in history, one in which education and advocacy around the climate emergency, public health, racial injustice, and economic inequity is imperative. At Earth Island Journal, we have doubled down on our commitment to uplifting stories that often go unheard, to centering the voices of frontline communities, and to always speak truth to power. We are nonprofit publication. We don’t have a paywall because our mission is to inform, educate and inspire action. Which is why we rely on readers like you for support. If you believe in the work we do, please consider making a tax-deductible year-end donation to our Green Journalism Fund.

The Computer Chip Industry Has a Dirty Climate Secret

As demand for chips surges, the semicondutor industry is trying to grapple with its huge carbon foot print.

A Matter of Spirits

A passionate group of farmers, distillers, and bartenders across the US and beyond are seeking to reduce the environmental footprint of alcoholic beverages.

So far, tree-sitters have foiled recent logging plans in Jackson Demonstration State Forest. But they are calling for long-term protections.

The Dixie Fire and Me

Can My Town Rebuild After Losing It All?

My Extreme World.  And (Un)Welcome to It.

We’re no longer just reading about the climate crisis. We’re living it in a startling fashion.